A Celebration of Kingston Geology 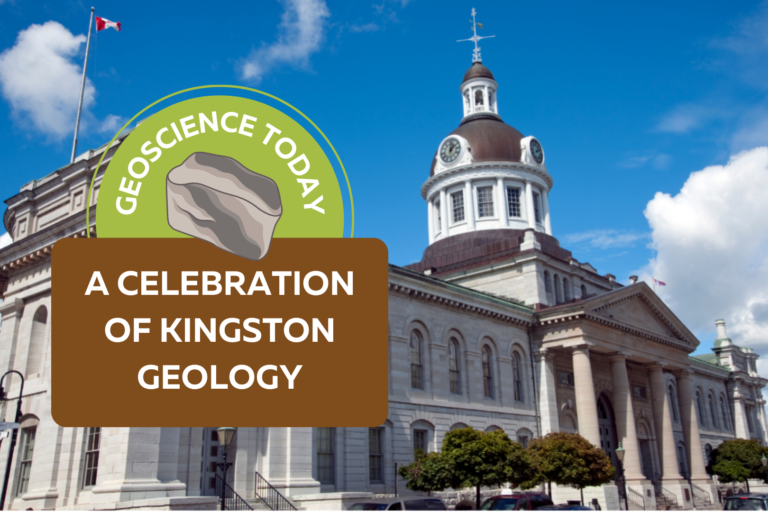 We at the APGO Education Foundation are always looking for an excuse to celebrate geology. What better way to do that than to sing the geological praises of the Kingston area! On Saturday, May 7, 2022, the APGO Education Foundation and Mining Matters will be hosting a table at the Science Rendezvous event in Kingston, Ontario, at the Leon’s Centre. We hope that you will drop by and talk a bit of shop with us, because we haven’t been able to talk about geology with you in person for so long!

This year our theme is “The Geology of Kingston.” From May 7-22, we will be offering a geology themed scavenger hunt where you can earn your digital “Geo-Explorer Badge” of Kingston, and a chance to win one of five cool prizes. Choose from a list of geologically interesting rocks listed on our site, then visit a minimum of six of those rocks located either on Queen’s campus or along the Kingston Waterfront. Take an original photo of the rocks you visit, then submit them to us online. That’s it! If you have visited the correct rocks and submitted an original photo, then you will qualify to win one of five beautiful geology textbooks. Five winners will be randomly selected from qualifying entries. You can also visit us at our booth on May 7th to look at some rock samples of Kingston and talk about how they formed.

Did you know that Kingston is also called the Limestone City? People used to build limestone buildings right on top of the limestone they excavated to make them! But limestone isn’t all that Kingston has to offer. Not even a little bit.

To say that Kingston has a complicated past would be a big understatement. The area shows evidence of so many geologic events throughout the past billion-plus years that it requires a lot of detective work by geologists to try and piece these events together. Perhaps we’ll never know the full detailed story; however, we can be sure it will give geologists something to think about for centuries to come.

To the northeast of Kingston lies a strip of Precambrian rock called the Frontenac Arch. It connects the Precambrian rocks of Algonquin Park to the northwest to those of the Adirondack Mountains to the southeast. The rocks themselves were formed between 1.1 to 1.4 billion years ago, the later stages of which were thought to be a time when there was quite a bit of volcanic activity, resulting in a lot of magma being deposited on the continent1.

As if all this magma spewing all over the ground wasn’t enough excitement, the igneous rocks that formed from this magmatism were then deformed due to a process called metamorphism. This metamorphism was a result of an incredibly massive mountain-building event, or what geoscientists call “orogenesis”. This mountain building event is called the Grenville Orogeny, and it lasted until about 980 million years ago. The mountain range itself was massive – it ran from Labrador, Canada, down to Mexico, in a northeast to southwest direction. The mountains formed when at least two continental landmasses collided with Laurentia, the large North American continental landmass at the time.

The term “collide” implies an immediate event. But the movement of continental plates is not instantaneous; average plate movement is 10 cm per year. While this rate of movement might seem inconsequential at first, remember that continents are ridiculously massive in size and just because they come in contact with another on-coming continent does not mean they stop moving! Once a continent collides with another continent head-on, the ground starts to buckle and has nowhere to go but up. Think about the last time you shoveled your driveway (brr!). When you put your shovel down, the snow is flat and beautiful, just as it was deposited. When you start to push your shovel though, the snow buckles and builds upwards, forming little mountain-like structures made of snow on your shovel. In orogenesis, instead of snow, the ground itself is pushed upward on a massive scale, forming mountains. Over many millions of years, the Grenville Orogeny was formed in North America, its western edge giving Kingston, Ontario a high five.

You might be thinking “Wait, I’ve been to Kingston and there weren’t any mountains there!” You’re right… and you’re wrong. Like all good things, even mountains must come to an end. Once the continents stopped pushing into each other, the ground was no longer being pushed upwards and the mountain building phase ended. With no upward building, the mountainous sediments had nowhere to go but down. Over the next several hundred millions of years, the powerful effects of weathering and erosion wore the mountains down until not much remained but their roots. When you walk over the Frontenac Arch, you are walking on the roots of an ancient mountain! At one point in time, these very rocks were at the bottom of a mountain as tall as the Himalayan Mountains. With that amount of weight sitting on top of you, you can imagine things would get pretty uncomfortable.

The rocks found in the roots of a mountain are commonly subjected to metamorphism. Because of the high temperatures and pressures there, they undergo deformation, which alters the original (or “parent”) rock to form a secondary, and ultimately, metamorphic rock. For example, if a granite rock is buried and subjected to high temperatures and pressures, it can turn into the metamorphic rock gneiss. When you stroll over the Frontenac Arch, you see lots of granite and its metamorphic product gneiss. You’ll also see marble, syenite, monzonite, migmatite, gabbro, quartzite and pegmatite2.

As millions of years passed, the North American continent moved so that what is now Kingston was positioned near the equator. By the mid Cambrian Period (approximately 520 million years ago) this area became a shallow tropical sea –a stark contrast to its volcanic phase 700 million years before! By this time, life was in full bloom in the seas, and there is nothing marine life likes more than a shallow tropical sea. Corals, trilobites, brachiopods, bivalves, gastropods, and many more Paleozoic marine animals flourished in these seas. Instead of the reductive effects of erosion, sediments were now being deposited on the seafloor, which would ultimately turn into the limestone, dolostone, and shale rocks we see on either side of the Frontenac Arch today. As you may have guessed by now, the Frontenac Arch was an area that was topographically higher than the regions to either side of it. This part of the mountain had not eroded as far down as the others, so it was not submerged in the water during the Paleozoic Era, and no sediments were deposited here.

All these events resulted in the exposure of the many rocks that define Kingston, Ontario. If you visit some of the beautiful outcrops in the Kingston area, you will notice many more interesting features such as dikes and magmatic intrusions. It would take many book volumes to summarize all the events that altered the rock here, and even then, it wouldn’t be a complete story! To learn more about Kingston’s fascinating outcrops, visit the Kingston Virtual Field Trip. Some of these stops are along highways, so be sure to only visit those ones virtually.

If you’re keen to talk more about Kingston’s complicated past, join us at Science Rendezvous 2022 on May 7, 2022 at the Leon’s Centre. See you there!

Deana Schwarz, P.Geo., is the Manager of Public Education Programs at GeoscienceINFO.com. She has Bachelor degrees in Geology and Biology, an M.Sc. in Geology, and a Ph.D. in Geology from the University of Western Ontario.