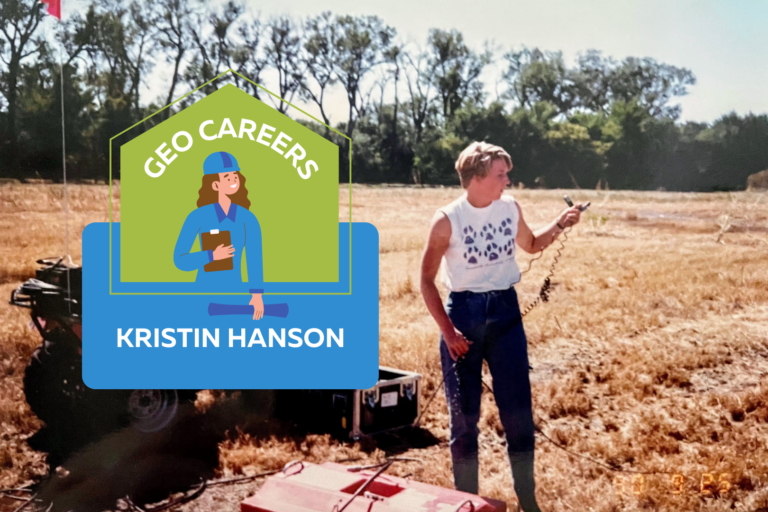 After 30+ years of work in the consulting industry, I look back at lessons I wish I had learned and advice that I wish I had received earlier in my career.  In sharing these personal lessons learned, I hope to help you with your career.

I finished my career in the position of Senior Vice President of Infrastructure Engineering for SNC-Lavalin, one of Canada’s largest engineering companies. I managed a team of engineers and scientists in Ontario who were designing major infrastructure (highways, transit lines, bridges, and buildings), providing geotechnical and environmental support services to infrastructure construction, and investigating and cleaning up contaminated sites. A female geoscientist managing a large infrastructure engineering group. This was a first! But let’s go back to when the story began….

I started my career in the Washington D.C. area working to clean up groundwater at former military bases.  Explosives and chemical warfare agents sound like something from an action movie. But early in my career, they were a daily concern. As I stood in my full PPE in the middle of a field riddled with ticks and unexploded ordnance, I wondered what in the world I was doing! I bonded with my co-workers while we helped each other in and out of our PPE, and even had to practice giving each other injections of an antidote in case of chemical warfare agent exposure. We bonded over this crazy work and relied on one another to accomplish our tasks safely. When I graduated with my B.Sc. in Environmental Geology, I thought I knew everything. I studied geology because I liked science and didn’t really want to work with people. I used to say I don’t like people; I just like rocks – they don’t talk back! My early experiences in the field taught me how little I really knew, and that people could teach me things, if I listened.

My work on the military bases projects got me new assignments working on other projects in the western US, France, and Puerto Rico. I would travel from one site to another, often without any breaks in between because managers all wanted me on their projects. I had turned into a pretty good field team leader, and they knew they could count on me to get the scope of work done right. I was managing field teams and drilling crews, often the only female at the site. I felt like I had to be tough and work hard to prove myself. I had no social life, I missed weddings and funerals, but I was busy with work. I thought that my dedication would be recognized and rewarded. Instead, I got exhausted and burned out. I eventually left my job to go to graduate school. I thought having my M.Sc. would help me get what I wanted: a career that I enjoyed as well as a life.

PIECE OF ADVICE #1:  Don’t sit back and wait for rewards to come to you. Good work is rewarded with more work. Speak up and ask for what you want!

While I was working on my master’s degree, my advisor told me that I should have a “career plan.”  I had no idea what that was at the time, but I thought about it a lot.  I asked my fellow grad students if they had a career plan.  I got some interesting perspectives from them and started talking to more people to see what I could learn from them.  This was a turning point for me.  I realized that my “drive for excellence” mindset that made project managers love me was probably considered aggressive and off-putting to a lot of people. I learned empathy and to listen to learn and understand.

PIECE OF ADVICE #2:  Listen, don’t assume. Focus on learning everything you can from those around you. Everyone has something interesting to teach you if you set aside your ego and listen.

M.Sc. in hand, I moved to Ontario and worked in the environmental consulting business as a hydrogeologist.  I came to realize that armed with the skills of empathy and listening, I did like working with people after all, and I made a pretty good project manager. In fact, I had leadership skills. I was an excellent “second banana.” I took pride in how much my bosses relied on me to get things done behind the scenes. One day my boss approached me and one of my colleagues in the hall. He said, “I’m planning a reorganization and I need to promote someone to Vice President and it will be one of you two, who wants it?” To this day I don’t really know why I had such a sudden reaction, but I immediately took a step back and pointed at my colleague. I didn’t say a word, just pointed at him. A month later he was my boss.

PIECE OF ADVICE #3:  Your career starts out like a leaf in a stream, you float along learning the ropes but if you don’t take charge, you will just end up where you drift. Don’t be passive, make some goals and a plan to achieve them, with these you have a way to navigate the stream to get to where you want to go. When you engage with a mentor, you are adding a motor to get where you want to go faster.

After I realized my mistake, I started engaging people as mentors, and trying to demonstrate that I was a senior manager. I had the skills, why didn’t I demonstrate them more openly? I started speaking out – a lot. I came up with ideas and strategies to improve the business. After a few years, there was another re-org, and I got that VP job. I loved it! I had really hit my stride. But it had taken me too long to get here.

PIECE OF ADVICE #4:  Go for it! You don’t have to have 90% of the qualifications of a job to apply; if you meet 50% go for it! You can demonstrate that you can quickly learn the rest. If it doesn’t work out this time, you have made a statement to yourself and to others that you are interested in new challenges and advancement.

In a senior role, particularly in a male dominated profession, I was often the only female voice around the table. I spent time educating my male colleagues to consider things from a different perspective. For example, everyone was always referred to as a “he.” I pointed out that if we can’t even make room in our language for the POSSIBILITY that there might be women on the team, how will we ever recruit more women? It took a long time, but they did recognize the need for change and support the building of a more inclusive environment. I eventually became the company’s Diversity & Inclusion Network chairperson and was so happy to see top leadership embrace changing the status quo to reduce barriers felt by women, people of colour, and many others. A lot of progress had been made in industry with respect to having policies supportive of equity, diversity, and inclusion, but the ongoing heavy lifting lies in changing our culture. I am happy to say that things have improved significantly over the last 30 years. But we all still need to be engaged in pushing boundaries and identifying non-inclusive language, actions, or situations.

PIECE OF ADVICE #5:  Speak up when you hear macro or micro aggressions – have a strategy you can implement in the moment when you feel like a “deer in the headlights.” Rather than sitting in silent shock, put your hand up, ask questions, say that’s not ok. Focus on feelings, behavior, and attitudes, not on condemning individuals.  My most successful strategy was just to ask them to repeat what they said: “Could you repeat that, please?”  When people know they are over the line, they will back down. Sometimes they are just looking to push your buttons. When they are unaware, this can turn into an opportunity to engage in an enlightening discussion.

Then came a bit of a mid-life crisis. I had been VP of Environment for many years. I felt like I couldn’t advance any further because I was a geoscientist in a large engineering company. I was stuck. A mentor was assigned to me as part of a corporate mentoring program. We had a wonderful mentoring relationship. He helped me see my career and accomplishments in a new light. He made me realize that the only barriers I faced were the ones I was putting up for myself. He encouraged me to talk to my boss about my desire to advance into a more senior leadership role. Eventually the opportunity came up to apply for the role of Senior Vice President. I won the competition and got the job. It was overwhelming how many women in our firm reached out to me to tell me that they were inspired by seeing a woman in a senior leadership position. When I announced my retirement, my greatest regret was leaving those women.

Geoscientists are key to investigating, remediating, and reclaiming contaminated lands and returning them to beneficial use. After a 30-year career, I’m proud to say I’ve seen several formerly contaminated sites turned into green space and parks. I’ve helped build transit systems and buildings that I can point to now with pride.  I have witnessed the culture changing to be much more dynamic and inclusive. I am proud to be a geoscientist and encourage young people to consider it for their careers. The future in this field is very bright.

I started out just a young person from small-town Ohio, but I ended up with a very successful career. Why? In part because I am very stubborn and refuse to give up, but also because I had mentors and colleagues that really inspired me and helped push me forward. As a retired professional, I get a lot of satisfaction from mentoring others.

LAST PIECE OF ADVICE:  My most important piece of advice is to find yourself a mentor, or a few! Don’t sit back. Take charge of your career and go for it!

Born in the US, Kristin is a graduate of the Environmental Geology program at Ohio University. She worked for five years at ICF Kaiser Engineers in Washington D.C. as a field geologist. After earning her M.Sc. in Hydrogeology from Ohio State University, she immigrated to Canada where she worked for Duke Energy’s in-house environmental services division in Toronto. She later joined a small environmental consultancy, Aqua Terre Solutions, working her way up to a senior manager position. Aqua Terre was purchased by SNC-Lavalin, where Kristin finished her career as Senior Vice President of Infrastructure Engineering for Ontario.

Kristin has volunteered for many years with her professional association, the Association of Professional Geoscientists of Ontario (PGO). In 2004, she was elected to serve on the APGO council, something she recommends highly to other geoscientists. It was a wonderful experience. She served as APGO President in 2011-2012. In 2013, Kristin’s outstanding contributions to the profession were recognized by her peers when she was nominated to Geoscientists Canada and inducted as a Fellow. In 2018 she was shortlisted by the national Women’s Infrastructure Network for the Outstanding Leader Award. Currently, Kristin is a Director on the Board of the APGO Education Foundation. She also volunteers as a mentor with the Women’s Transportation Symposium (WTS) and the Prosperity Project.