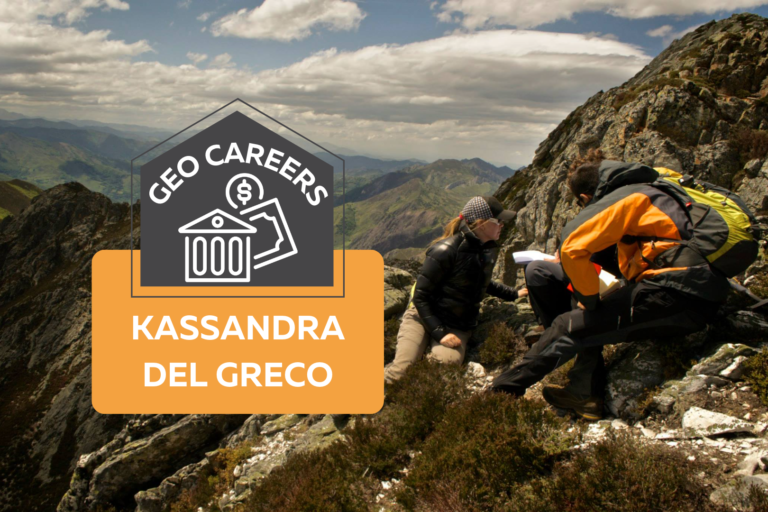 When asked if I could write a little something about my career in geoscience, my gut response was, “I’m not sure I’m qualified to write something.” However, with a little reflection and persuasion, I thought it might be beneficial for others to read about how far an education in geosciences might actually take you.

My initial interest in geology came out of my decision to take a “bird” course in CEGEP (Collège d’Enseignement General Et Professionnel), a type of junior college that encompasses the equivalent of grade 12 and the first year of university, to alleviate the heavy math and physics schedule I had lined up for one term. I signed up with a friend, thinking “Won’t it be nice to take a really easy class this semester” and soon found myself completely enthralled with learning about Earth’s history and systems. When university applications came around later that year, I began to consider that the career as a mathematician I had envisioned for myself didn’t quite make sense and I soon found myself wandering over to the geology, mining engineering, and geophysics booths at the McGill University open house. I was reminded during my visit to McGill that I knew two women who had graduated from McGill’s geology program. Two young women from my community, who I knew from extracurricular activities, had graduated with McGill geology degrees a few years prior and from what I could see on Facebook, were living adventure-filled lives working as exploration geologists in places like Australia and Africa. Growing up I had limited travel opportunities; it suddenly occurred to me that there are literally rocks all over the planet and that in theory, I could work anywhere in the world as a geologist, and with a career as a geologist, I might have the opportunity to visit places I’d never dreamed of before. What really sealed the deal was when I heard about the famous “Willy Trips” at McGill’s geology department, where Dr. Anthony Williams-Jones travelled to different destinations with a class of students every year to explore and learn about the geology of a new country.

I was hooked. I went through university taking every opportunity to attend as many field trips as I could, and visited places like Chile, Tanzania, Columbia and the Southwest United States during my studies alone. I was so excited to begin my career as an exploration geologist and visit places like the remote Canadian North, Australia, Africa, South America…you name it. Everything was on track until 2012, the year I finally graduated. I entered the job market, top of my class, ready to begin working as an exploration geologist in mid-2012. Little did I know that 2012 would mark the beginning of one of the longest commodity and mining market downturns in history. It was difficult to find a job as an experienced geologist, let alone a freshly graduated geologist with just a summer’s worth of experience. I hustled as much as anyone, applying to literally any job I could find in the industry, but like many of the peers I graduated with, had no luck. It was disheartening, to say the least. After about 8 months of unemployment, I began looking at graduate studies opportunities. I thought that maybe I could either pursue a career in academia, or at the very least, hide out during a Masters degree and hope that within a couple of years the industry would turn and entry level jobs would begin to reappear.

During my Masters degree at the University of Victoria I studied the structural geology and tectonics of the Cantabrian mountains in Northern Spain and was fortunate enough to spend a summer in Spain doing field work and attending conferences with geologists from the University of Salamanca. I finished my M.Sc. in mid-2016 and two hours after submitting my final thesis I was called by my first ever boss in the Quebec mining industry who I worked for a summer prospecting. He asked me if I was looking for work (I was) and told me about an opportunity for field work that summer (Holy cr*p, my plan worked!). I had my boots on the ground in Northern Quebec about two weeks later and was thrilled to, four years later, be starting my career as an exploration geologist.

It was about 18 months of bliss, working multiple consecutive contracts in exploration for multiple gold exploration companies in Quebec. I was working on rotations that were 21 days on, 10 days off, or 14 days on, 14 days off. Of course, I took every opportunity to travel on my time off, living out of a duffle bag for months on end, visiting places like Portugal, Nicaragua, Costa Rica, and Italy. Essentially, I would go anywhere I could get to for a reasonable price and with less than 7 hours of flight time. However, it was about two years later when I started to feel the pains of the job. It turned out that as much as I loved learning about geology in school, I didn’t exactly love the work. I wasn’t totally enthused by core logging, learning to create geological models, or even spending time in the field. I was beginning to feel worn down by the swamps, the bugs, the heavy bags full of rocks, and spending whole days in the bush soaking wet. On top of this, I started to become acutely aware of the fact that I had no community. Over nearly two years, I had barely spent any time at home, causing me to feel disconnected from friends, unable to get involved in any type of club or activities at home, and forget dating, it was impossible!

I began to reflect on whether this was the career for me. Sure, I loved learning about geology, and I loved travelling, but I didn’t really enjoy the work or the life I had built for myself anymore. I began searching for a mentor (I found a great one). I started writing down all the things that I loved doing, hoping that when I saw them combined, I might have an idea of what career path I should be pursuing. Through these exercises and with the help of my mentor, it became clear to me that I might be better suited for a management role, and that maybe I would do better on the business side of the industry. My mentor and I spent a lot of time discussing options to get there, 1) Do an MBA (expensive!), 2) Start cold calling groups on the finance side of the industry to see if they were looking to hire a geologist to work as a research associate, 3) Pivot completely to a different industry. Ultimately, I settled on the idea of trying to break into the finance side of the industry, with the goal of learning the finance and business side of the industry.

It didn’t take long once I started putting myself out there to find the role I was looking for. A few months later my mentor reached out to me saying he had come across an opportunity where an investment fund was looking for an exploration geologist to join its team in Denver. After a lengthy interview process, I landed the job and found myself moving from Montreal to Denver. I began a whole new career where I would be learning about the finance side of the industry and working on transactions with mining companies with projects all over the world.

It has been nearly four years since I made the change, and I am absolutely loving it. I get to use my geologic expertise to assess potential investments in companies with projects from grassroots exploration to producing assets. I’ve also learned a lot about structuring deals, company and project valuations, and evaluating management teams and boards. I should also mention that the role allows me to travel all over the world to visit projects, allowing me to satiate my travel bug, while still sleeping in my own bed the majority of the time.

Although I am still quite early on in my career, I do allow myself some reflection, frankly, still finding it surprising that I have landed where I am. When I entered university over a decade ago, I would have laughed at anyone who suggested I pursue a career in finance, and yet here I am loving every minute of it. I do, however, also appreciate the path it took me to get here. I bring a different background and perspective to my team at work, having spent time in the remote north of Canada, at exploration camps and mine sites, and having travelled significantly in my early twenties to many locations off the beaten path. The one thing I would recommend to all students as they begin their career in geosciences, other than finding a mentor, is not to limit themselves by not considering alternative career paths. You never know where you might end up.

Kassandra is a Canadian geologist with experience primarily in exploration in Quebec. Over the past four years, she has worked as an investment team member for Resource Capital Funds in Denver. Kassandra is passionate about Equity, Diversity, and Inclusion initiatives and sits on the board of Women in Mining Canada.