Scientific Ocean Drilling with the JOIDES Resolution: A summary 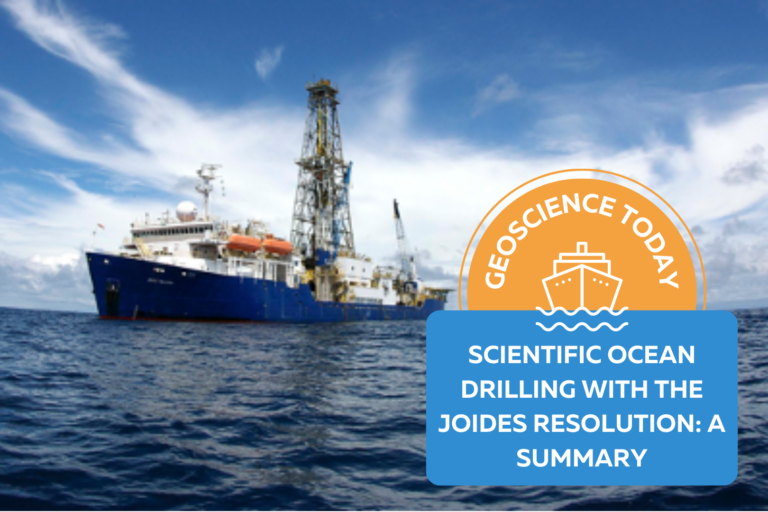 Have you ever wondered how scientists study the rocks and sand on the bottom of the ocean? The International Ocean Discovery Program (IODP) is a research program dedicated to investigating sediments and rocks at the bottom of the ocean as a way to understand the history and structure of the Earth as well as the processes that shape our planet. IODP is funded by the US National Science Foundation and by national research agencies in 25 countries around the world. To be able to do the research as planned they need a research vessel that has the capability to collect rock and sediment samples from deep in the ocean. One of those vessels is called the JOIDES Resolution (often called The JR; see photo below).

The JR has an international crew of seafarers, drillers, scientists and engineers all with the goal of improving our understanding of how geology, oceans, life and the atmosphere interact on Earth and how these systems have evolved over millions of years.

Scientific ocean drilling has been a highly successful international collaboration for more than 50 years. The first ocean drilling vessel, before the JR, was a famous ship, Glomar Challenger, that roamed the world’s oceans from the late 60’s until the early ‘80s and directly contributed to our understanding of tectonic plates and how they form (see maps below).

Today, the JR conducts 4 to 5 expeditions every year collecting samples and data of oceanic crust and sediments from all over the oceans to continue to build a better understanding of our planet, both past and present. Below are some example questions that were asked when the JR and predecessors have gone out on research expeditions:

If you can ask a question, they want to answer it.

The JR is venturing out to sea yet again this year to complete the IODP Expedition 393, the final chapter of a four-year expedition research project called the South Atlantic Transect. The last time this transect was visited to this extent was with the Glomar Challenger back in the 1960’s. The sites run perpendicular to the western flank of the Mid Atlantic Ridge, a range of submarine mountains that runs down the middle of the Atlantic Ocean where new oceanic crust is made and moves laterally (to the side) as it cools and sinks. This allows many processes related to ocean crust formation and aging to be studied.

The Expedition 393 science team includes an array of different science fields. For instance, the team includes geoscientists that will be studying the microscopic fossils that can be found preserved within the ocean sediment. Microscopic refers to a significantly small item that requires the use of a microscope to see it. The science team also includes microbiologists that study the microscopic living organisms that are in the sediment and rock of the ocean floor! This addition to the research will help us better understand the extent of life on our planet.

You can read more about the South Atlantic Transect 2 and the expeditions that came before it on the blog of the JR.

You can also partake in the adventure and join the Onboard Outreach Officer, Tessa Peixoto, virtually on Zoom for a free ship tour. Expedition 393 will happen between June 7 and August 7, 2022. Whilst on the tour you will have the chance to speak to the scientists on board and ask them questions of what it is like to do research at sea. Email thejoidesresolution@gmail.com to find out more about how to sign up!

The value of rocks.
A poem by Tessa Peixoto

A rock is just that.
A shelter.
An anchor.
A form of entertainment.

A rock is also a storyteller.
Its parts,
If you pay attention long enough are called elements.
Its parts,
are the keys to understanding history.
History that tells of death, change, and renewal.

-Tessa Peixoto, the author of this article, is the Onboard Outreach Officer for Expedition 393. You can find her poem here.