The Niagara Escarpment is Crumbling—Here’s How, and Why You Should Care 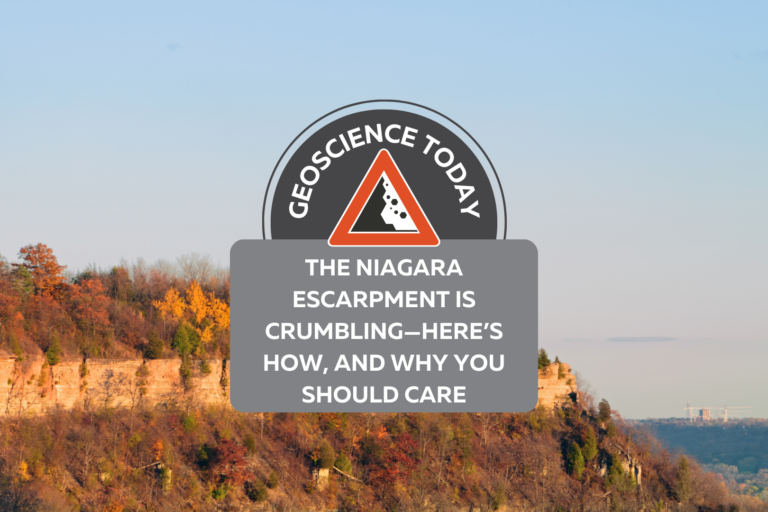 If you visit or live near a geological landform, such as an escarpment, waterfall, or hillslope, you may notice that rock debris accumulates over time. Patrons of the Niagara Escarpment’s Bruce Trail, for instance, can observe rock blocks ranging from the size of a cell phone to a small car. To a hiker, fallen rock may not seem concerning. Yet what happens when geology meets urban infrastructure?

The Niagara Escarpment is a large sedimentary landform which spans 400km across the northeastern United States and southern Ontario. Composed of dolostones, limestones, sandstones, and shales from the Paleozoic Era, its face is steep and heavily fractured. Each stratum, or layer, of rock has a unique composition which dictates its susceptibility to erosion. For instance, thick, resistant layers of the Irondequoit dolostone are often undercut by the softer Rochester shale which erode at a faster rate. This produces sharp overhangs which create angular blocks when there is not enough rock to support the overlying material.

The escarpment bisects a number of urban areas, such as Hamilton, Ontario, where it is integrated into city infrastructure. This poses significant risks because the fractured escarpment face experiences frequent rockfalls which threaten the safety of citizens and have caused considerable infrastructure damage. For many years, the reason for the rapid weathering rates observed on the escarpment was unknown. New research has revealed the role of temperature changes in the development of fractures.

How is the Escarpment Weathered?

There are a variety of processes responsible for the weathering of rock, such as be chemical, mechanical (e.g., cracking), fluvial (e.g., flowing water), or biological (e.g., tree roots) in nature. However, the escarpment’s location in a temperate climate is unique because it is subject to cold winters and warm summers. This means that temperature plays a significant role in freeing rock from the escarpment face.

Freeze-thaw weathering describes processes which create fractures in rock by causing water contained within pores or pre-existing cracks to freeze and thaw over time. When water freezes, it expands. This forces apart a body of rock from the interior, often producing stresses which exceed the strength of the rock. Freeze-thaw processes can occur within individual pores saturated with water, or on larger scales where ice lenses accumulate in pre-existing cracks. During the winter months, this form of weathering produces debris ranging from small flakes to large angular blocks.

Thermal weathering is similar to freeze-thaw in that it involves fluctuations between warmer and cooler temperatures. Rock expands during warming and contracts during cooling, which causes the rock to deform throughout the day.  Over time, these temperature cycles can create enough stress to cause fractures to develop. This is referred to as thermal fatigue, because each fluctuation is not individually powerful enough to fracture the rock, but over time the stresses accumulate.

Conversely, thermal shock describes events of rapid temperature change (which can range from 1°C to over 10°C per minute) that induce high stresses as the rock expands or cools. This can cause instantaneous cracking.

These weathering processes are not limited to geological landforms. Sidewalks, buildings, and even prehistoric rock art are all susceptible to temperature changes.

How is Weathering Studied?

At McMaster University, our research group studies these processes from a variety of perspectives. My work implements a network of remote temperature probes installed at exposed rock outcrops across the escarpment. At each site, probes are inserted into pre-existing fractures and affixed to the rock surface to measure temperature at one-minute intervals. This reveals changes on short time scales which enables us to identify thermal shock events and freeze-thaw cycles. By collecting data year-round, the temperature probes also provide information about the seasonality of fracturing.

To assess the spatial distribution of weathering, an infrared thermal camera is employed which photographs differences in surface temperature across rock outcrops. Our group uses a rock trap (pictured below), to collect samples of falling rock generated by weathering processes. This is paired with drone-based 3D models which enable us to identify the rate of weathering and location in which blocks have fallen from the escarpment face.  My research also involves climate modelling to predict future changes in weathering intensity using a suite of regional climate models.

Our research suggests that climate change may exacerbate weathering processes by increasing the range of temperatures experienced by rock throughout the day. In exposed rock faces, the surface warms rapidly in comparison to pre-existing fractures which are insulated from atmospheric conditions. This creates a thermal gradient between the fracture and rock surface—during the day, the surface is warmer than fractures, whereas at night the fractures are insulated from cooling and remain at higher temperatures than the surface.

As the climate warms, this effect will be exacerbated. Repeated warming and cooling will increase the gradient of temperature between the surface and fractures, promoting processes such as freeze-thaw and thermal weathering which are predicated on thermal cyclicity.

Why Should I Care?

The Niagara Escarpment is well integrated into urban infrastructure. Rapid rates of weathering and the location of exposed rock walls poses significant safety risks to commuters and pedestrians alike.

The portion of the escarpment which passes through the city of Hamilton, Ontario is a pertinent example. Between 2007 and 2017, there were nearly 40 damage claims from falling rocks, and eight major rock falls over a two-year span each incurring $25,000–$500,000 in costs. While the city spends $300,000 annually to update preventative erosion measures, research suggests that numerous areas remain susceptible to rockfall and require $12 million in protective measures. Commuters along the Niagara Escarpment routinely experience rock hazards, such as a 2016 event in which a truck-sized boulder nearly struck cars along the 403 Highway.

These issues are not unique to the Niagara Escarpment alone—geological landforms in all temperate environments are susceptible to freeze-thaw and thermal weathering processes. As climate change enhances weathering, the safety of roads and trails will be threatened, infrastructure damaged, and taxpayer costs to address rockfall will rise.

To address this, we must remember that geological hazards are not random. Factors such as pre-existing fractures, seasonal temperature variations, and lithology (rock type) are all determinants of weathering susceptibility. Communities prone to rockfall must be proactive in their approach by assessing vulnerability to hazards before they happen so that high-risk areas can be protected. Moreover, geological risks must be considered in urban planning projects to prevent the development of land near falling rock, and to avoid road construction in rockfall-prone areas. By understanding the mechanisms by which rockfall occurs we can decrease risk while improving the longevity of urban infrastructure.

Henry Gage is a Schulich Scholar and undergraduate researcher at McMaster University in Hamilton, Ontario. His work focuses on the development of fractures in the Niagara Escarpment, examining how freeze-thaw and thermal weathering processes occur and are impacted by climate change. Henry also conducts research in glacial sedimentology and wetland ecohydrology. He is the Director of the Climate Action Consultancy, a non-profit organization which provides pro bono sustainability consulting to businesses and residents across Ontario. To learn more about Henry’s work, visit his Twitter page at @henrygage_.