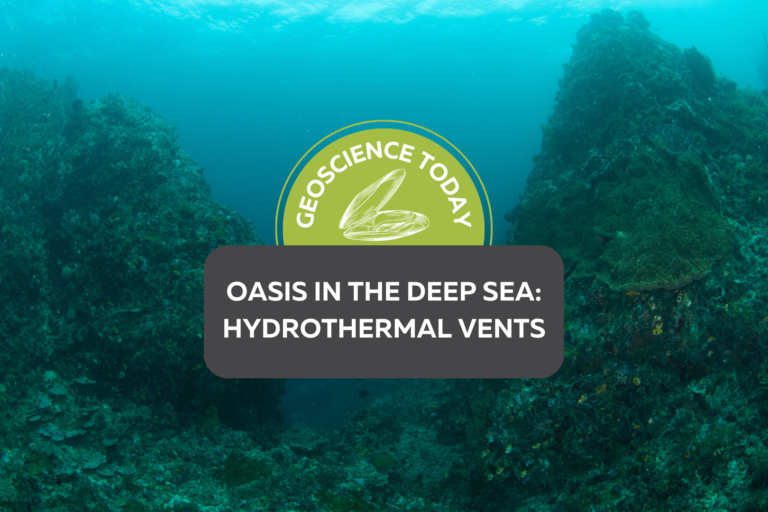 The deep sea is so different from other ecosystems on Earth, it’s almost like another planet! In fact, the deep sea is so isolated and mysterious that we know more about the Moon than we do about the ocean floor. Deep-sea hydrothermal vents, also called “black smokers,” are areas along the seafloor that discharge scalding hot water. They are located near areas of high tectonic activity and volcanic sites, commonly near mid-ocean ridges (MORs). These black smokers are important because they host a variety of exotic organisms, can help us to understand hydrothermal processes along mid-ocean ridges, and have economic importance.

In 1976, a series of temperature spikes were observed by scientists exploring a mid-ocean ridge near the Galapagos Rift. From this data, scientists discovered hydrothermal vents, along with new ecosystems and species within these vent systems. The vents were first observed through a seafloor imaging system, in which a camera is submerged in water to take photos of the observation target, and the images are used to create seafloor maps. The first direct observations occurred when a manned submersible, The Alvin, was used to observe and sample the vents and their ecosystems. There was great fascination with this discovery since up until this point scientists thought that life required sunlight to exist. But here there was a thriving ecosystem that found its own source of energy devoid of light.

Black smokers are probably the last place you would expect to find life, since they spew toxic material and there is absolutely no light. These eerie vents, however, are home to complex ecosystems with a thriving community of biotic creatures. At the base of the food chain there are bacteria and Archaea, which produce energy through chemosynthesis. Chemosynthesis is a life-process where inorganic carbon is converted into carbohydrates using inorganic molecules. Chemosynthesis involves using energy released by inorganic chemical reactions to produce food. These inorganic reactions include inorganic compounds, such as hydrogen sulfide or hydrogen gas undergoing oxidation, acting as the energy source. Many kinds of chemosynthesis occur, as there are different kinds of bacteria that can oxidize substances varying from sulphur to methane, even iron, and manganese. This variety of bacteria form the base of a food chain that includes deep-sea clams, mussels, and giant tube worm species. These species live in symbiosis with the chemosynthetic bacteria and would not exist without this relationship.

Viruses discovered in these environments interact with bacteria. Horizontal Gene Transfer (HGT) is a process in which a virus implants some of its DNA into a bacteria, reaping some of the bacteria’s DNA. Viruses have the power to alter the bacteria’s gene expression, giving the virus the unique ability to carry different kinds of genetic information, which is useful in such extreme environments. This allows the bacteria to survive in ever-changing environments. HGT occurs due to the number of bacteria and viruses suspended in these environments and is important to the species’ evolution. The type of vent, distance from the vent, and lifetime stage of the vent are all factors that dramatically change the temperature and mineral concentration of the region. For bacteria to survive, they need to be able to adapt relatively quickly to rapidly changing habitats. HGT allows the bacteria to survive in its new environment and produce versatile offspring.

The geosphere, hydrosphere, and biosphere are the three main Earth systems that interact with hydrothermal vents. Since there is no sunlight for life processes in hydrothermal vent ecosystems, the energy required by living organisms is gained from tectonic movement near the MORs. Water seeps into the ridges, is heated by magma, then mixes with minerals. Fine-grained sulphide minerals containing metals such as copper, zinc, lead, gold, and silver from the Earth’s crust are dissolved in high concentrations in hot hydrothermal fluids. When these metal sulphides are exposed to cold ocean water, they form black chimney-like sulphide deposits around each vent, hence the name black smoker. The water that is ejected contains methane and sulphides; substances required for chemosynthesis. The nature of chemosynthesis illustrates how intertwined Earth’s systems are; the removal of the biosphere would nullify the existence of such a fascinating ecosystem.

Hydrothermal vents contain exotic ecosystems threatened by the prospect of deep-sea mining. Deep-sea mining is becoming a popular consideration for mineral exploitation as the popularity of land mining is rapidly diminishing land-based ore deposits. Mineral ore deposits are composed of fine-grained sulphide minerals containing metals. Although deep-sea mining may benefit the economy due to the abundance of ore deposits, there is controversy about destroying these ecosystems. Some argue that mining near black smoker active volcanic sites is reasonable because the volcanoes will erupt across many square metres of the seafloor, causing destruction in these sites. Environmental advantages for deep-sea mining, as opposed to land-mining, results in no waste rock, no acid mine drainage, and no holes in the ground that could contribute to seismic activity.

Kathryn Cheng is an undergraduate student at the University of Toronto, pursuing a B.Sc in Geology and Chemistry. She has an interest in hydrothermal vent systems and isotope geochemistry. She is currently conducting research in the Metal Isotope and Isotope Biochemistry Lab at UofT investigating mercury contamination from artisanal small-scale gold mining in South America. Kathryn is the President of the Undergraduate Earth Sciences Association at UofT and the Women in Mining UofT student chapter.