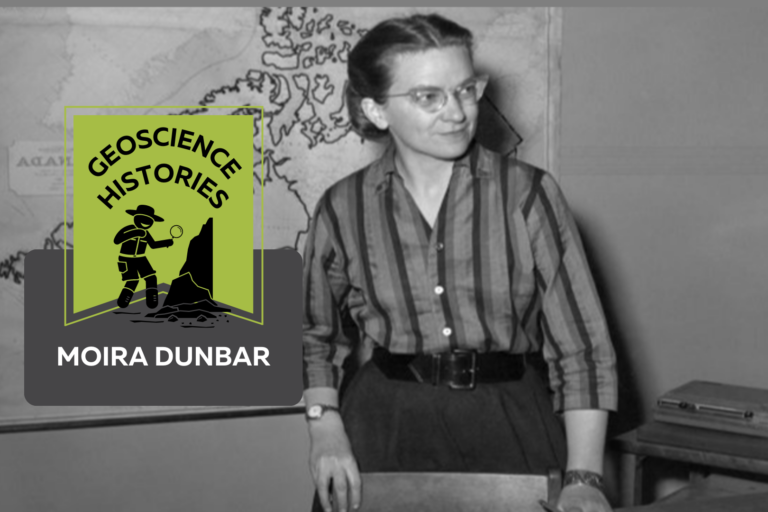 Musician, geographer, actress, and sea ice researcher: Moira Dunbar was a legendary scientist. Born in Edinburgh, Scotland, Moira emigrated to Canada when she was 29 years old and started her career in sea-ice research working for the Government of Canada. She received many awards over her career for her important research and publications on Arctic ice.

Growing up, Moira’s family were academically-inclined. Her brother became a scientist and was made a Fellow of the Royal Society of Canada. Moira studied geography at Oxford University but when she graduated, she didn’t immediately go into research.

During the Second World War, Moira worked as an actress and a stage manager with the English Theatre. She toured Great Britain with the theatre and performed for the armed forces. “I was what is known as a character juvenile,” she said later, “which meant playing a long string of comic maids.” Despite her lacklustre acting career, she also was musically talented, playing the guitar and piano.

In 1947 Dunbar emigrated to Canada. Once there, she became aware that the Canadian government was looking for scientists. She got a job at the Joint Intelligence Bureau of Canada to research the movement of Arctic ice. This was important to the Canadian efforts during the Cold War, since the Canadian and American governments were afraid of nuclear attacks via the Arctic.

In 1952, Dunbar moved from the Intelligence Bureau to the Defense Research Board. Two years later she applied to join a Royal Canadian Navy icebreaker boat taking scientists to the Arctic for research. At this time, naval boats had never taken a woman aboard. Moira recalled that they “expected [her] to go around seducing all the men or something” (The Herald, 1999). She kept applying to go on icebreaker trips and for six months fought against her superiors to be given permission to go. Eventually her request reached the Deputy Minister, who decided that she was, in Moira’s words, “probably harmless.” She was finally allowed to go, but reflected that “they regarded me as some sort of cross between a delicate flower and a dangerous disease” (The Herald, 1999). Over time, however, she was accepted on the team and it was not raised as an issue again.

While on the icebreaker journeys, she analyzed sideways-looking radar in order to determine patterns in the movement of ice. She used photos of sea-ice taken at different times during the day and year to analyze ice conditions and determine the ice’s predicted position at different times of year.

In addition to time spent on icebreakers, she also joined Royal Canadian Air Force flights to study Arctic ice from the air. Dunbar spent nearly 600 hours flying over her career. She was one of the first people to observe and document an Arctic formation called a polynya. This occurs when strong winds flowing south combine with warm upwelling in the sea and melt or thin ice. She worked on standardizing ice terminology and wrote many papers on ice conditions in the Canadian Arctic. In 1956 she published Arctic Canada from the Air, written with Keith Greenaway. This book was a combination of aerial images and descriptions, and introduced many people to Arctic landscapes.

In her studies of Arctic ice, she became aware of the important research happening on the subject in Russia. She studied Russian and became certified as a linguist in Russian. She travelled to the Soviet Union and Finland in 1964 in order to learn from their ice-breaking operations.

In 1958 Dunbar wrote a particularly interesting article for Canadian Art about the Royal Arctic Theatre. Between 1819 and 1876, The Royal Arctic Theatre was a series of theatre productions put on by members of expedition trips to the Arctic during the long winters when the ships were stuck in the ice. Dunbar writes that “surely nowhere have plays been produced in more unlikely surroundings or in more difficult conditions than aboard the ships of British naval expeditions wintering in what is now the Canadian Arctic” (pg 110). Indeed, some of the plays were performed in less than 0 degrees Celsius on scarcely protected ship decks. There were no such equivalent theatre productions on Moira’s icebreaker trips, but being an actress herself, the Royal Arctic Theatre would have held a special appeal to Moira’s interests.

In 1978 Moira Dunbar retired to run a hobby farm and volunteer as a local historian in Ontario. She never married but enjoyed a long and diverse career. From growing up in Scotland, to acting for troops across Europe, to trailblazing on Canadian icebreakers, to flying alongside Air Force pilots over the Arctic; Dunbar’s career was filled with adventures and learning. Her impact in Arctic glaciology and sea-ice research is still felt today.

A Selection of Moira’s Publications:

Veronica Klassen is the Manager of the Foundation’s blog – Beneath Your Feet: A Geoscience Blog. She studied Arts and Science at McMaster University with a minor in Earth Science and has a Master’s in Science Communication from Laurentian University. She is passionate about making science accessible and engaging to the public.