Visit to Ametista do Sul, Brazil 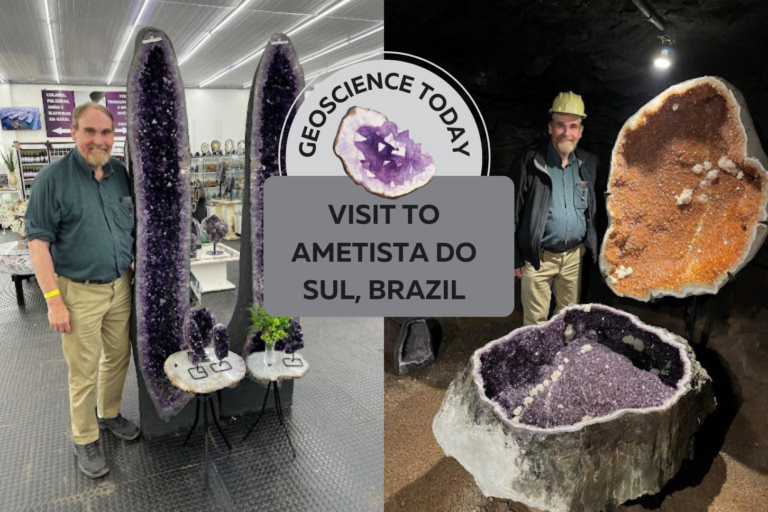 Brazil has long been famous for its tremendous amethyst deposits. I recently checked off a major bucket list item by visiting Ametista do Sul, which is in the northern part of the state of Rio Grande do Sul in southwestern Brazil. This is the main area that produces Brazil’s famous amethyst geodes. Production is about 400 tonnes per month. These geodes occur in basaltic volcanic flows formed about 130 million years ago.

Typically, geodes form in a spherical cap-shape, sometimes elongated vertically. The outer layer of the geode is made of celadonite, a dark green mineral in the mica family. This outer layer is very useful to miners looking for geodes, as the dark green celadonite is easily recognizable. Under the celadonite there is a layer of agate (chalcedony), then colourless quartz, then finally amethystine quartz. At Ametista do Sul, the geodes occur in a 40 to 50m thick basaltic lava flow that formed in the Lower Cretaceous period. When the lava formed, there were especially large gas bubbles trapped in the rock. Water entered the empty spaces through fractures, over time forming the amethyst geodes.

First stop was at the Belvedere mine, which has a terrific underground tour including a demonstration of drilling with an old jackleg and an actual blast. They use black power, which is a low impact explosive (gunpowder), to just gently break the rock around the geodes, which are then carefully excavated by hand using chisels. When a geode is located, the miners make a small hole in it and then put a light inside to evaluate the quality of the amethyst. The value of the geode increases the darker the purple and the larger the crystals. Sizes of geodes are very variable but can be up to as much as 3 metres long.

The mine has a magnificent display of amethyst geodes in their underground gallery, which you can see in the accompanying photos. These geodes are enormous – up to about 2 metres long by 1 metre wide. Several are accompanied by very beautiful carvings in basalt. Several geodes of citrine are also on display. Geodes with low quality colour are typically heated to form yellow citrine. This converts ferrous iron to oxidized ferric iron causing the colour change. The majority of citrine is formed by heating amethyst as it rarely occurs naturally.

In addition to its mine tour and extensive gallery, the mine also has an underground wine bar where you can sample wines made in the area and pick up a bottle or two (which I did). This is also a remarkable underground restaurant at the Belvedere Hotel.

Every table has an enormous geode in the middle of it covered by glass. You can also see some geodes in the wall of the mine and there are some fabulous geodes also on display. In addition, there is an underground pool and hot tub next to the restaurant for hotel guests to relax in. Clearly the hotel is doing very well as it has embarked on a major expansion to its facilities adding a series of cabins and a new major display area.

After the marvellous mine tour and lunch, we then went into the centre of town to visit a huge rock and mineral store called LP Minerais (lpminerais.com.br) in downtown Ametista do Sul.  I have never seen so much amethyst, agate, rock carvings, etc, in one place.  It was spectacular.  The back room was filled with more amethyst geodes waiting to be sold and shipped.  I picked up some terrific samples to take home!  This was an absolutely amazing day!!

Dr. Bill Pearson, P.Geo. has over 40 years of experience in the national and international mining industry and has carried out exploration and development programs in 17 countries around the world.  He is formerly Vice President, Exploration for Desert Sun Mining Corp. (prior to April 2006 takeover by Yamana Gold Inc.), Executive Vice President, Exploration for Central Sun (prior to April 2009 takeover by B2Gold Inc.) and is currently President & CEO of Coastal Gold Corp., a junior mining company whose principal project is in southwestern Newfoundland. Dr. Pearson is the recipient of the 2015 PDAC Distinguished Service Award for his service to Canada’s Mineral and Exploration Industry. He convened the first meeting of the Committee for the Professional Registration of Geoscientists of Ontario (CPRGO) in March 1989, which he chaired for seven years. He was President of the Association of Geoscientists of Ontario (AGO) from 1996 to 2000 and was the founding President of Professional Geoscientists Ontario (PGO) from 2000 to 2003. In addition to his work for the geoscience profession in Ontario, Dr. Pearson was instrumental in the formation of the Canadian Council of Professional Geoscientists (CCPG now Geoscientists Canada), where he served as one of CCPG’s founding directors.  He is founder and Chair of the APGO Education Foundation.